Christopher Columbus - Voyage to the End of the World - ASSEMBLY PACK 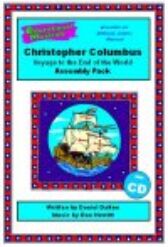 Large Mixed Cast
Christina and Pablo are desperate to see the world, so they volunteer for the next ship to leave town

He claims that the world is round and that if they sail far enough West, then they will eventually arrive in the East

Will they make it to the East or will they fall off the edge of the world?

Although created as a musical, Christopher Columbus is a fictional story accurately based on the historical facts known about the Columbus' epic first voyage

This ASSEMBLY PACK is a three song, shortened 10-15 minute mini-version of its parent title

A Reduced Art Pack - containing instructions as to how to design and construct the scenery, make the costumes and recreate the props

Yes the world is round