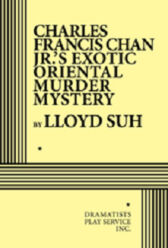 Amid the backdrop of ongoing war in Vietnam and a peak in the Civil Rights movement, they devise a wild, impulsive theatrical trip through the history of "Asians in America" ...

From the ancestral railways of their forebears

To the shameful legacy of Charlie Chan stereotypes

“‘Ah. So.’ You’d be surprised just how much hilarity and invective the playwright Lloyd Suh can work out of those two tiny syllables. They are among the stock sayings of Charlie Chan … whose legacy Mr Suh inspects and implodes in the very messy, very funny, very angry Charles Francis Chan Jr’s Exotic Oriental Murder Mystery …” ~ The New York Times