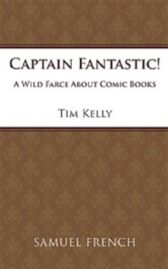 A Wild Farce About Comic Books

In the spirit of fearless journalism, he has written an editorial for the school paper suggesting that the proposed site for a new high school building is actually a swamp!

The land speculator is not amused

The high school bully, a dead ringer for the Godfather, is muscling in on the Prom Queen Contest

In such trying times, Waldo draws strength from his comic book Wonder Heroes

So, when knocked out in a fight with the school Godfather, he enters a twilight world where all the characters of Act One are transformed into the colorful and totally unbelievable characters of Waldo's beloved comic books!

A fast-paced comic book farce with a zany romance, some rip-roaring chases, slapstick action and of course good triumphing over evil!