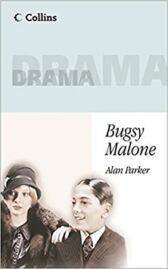 Spoof gangster story set in 1920s USA during Prohibition with kids playing the parts of adults ...

Meanwhile Bugsy Malone, the guy all the girls love, has fallen for showgirl Blousey Brown

But Fat Sam's girlfriend Tallulah is interested in Bugsy ...

The show is fun from start to finish with the characters getting killed by custard pies squirted from a 'splurge gun'!

Especially adapted for schools from the film, it requires a large mixed youth cast and offers 15 major roles

This Script also contains the song lyrics and stills from the film, as well as suggestions on lighting, staging and costumes

The Full Score is only available For Hire, but for Vocal Selections click here