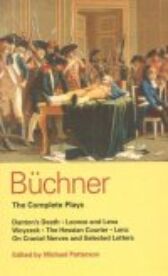 The complete collection of Büchner's plays in one volume

Büchner was acknowledged by figures as divergent as Antonin Artaud and Bertolt Brecht to be the forefather of modern theatre. On his death at the age of 23, he left behind some outstanding dramatic works: his historical drama, Danton's Death, 'the most remarkable first play in European culture' (Guardian), translated here by Howard Brenton and Jane Fry; the innovatory tragedy, Woyzeck, translated by John Mackendrick; and the absurdist comedy, Leonce and Lena, translated by Anthony Meech

He also left a powerful short story, Lenz, an important account of his research into cranial nerves, and his revolutionary pamphlet, The Hessian Courier. All these are collected in this one volume and supplemented with a selection of his remarkable letters