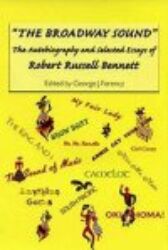 The remarkable career of composer-orchestrator Robert Russell Bennett (1894-1981) encompassed a wide variety of both "legitimate" and popular music-making on Broadway, in Hollywood, and for television

He worked alongside Jerome Kern, Cole Porter, George Gershwin, Irving Berlin, Richard Rodgers, and Frederick Loewe on much of the Broadway canon

Among the more than 300 musicals on which he worked between 1920 and 1975 are Oklahoma!, My Fair Lady, Show Boat, South Pacific, and The Sound of Music

The Broadway Sound is the first publication of Bennett's autobiography, and also includes eight of his most important essays on the art of orchestration.