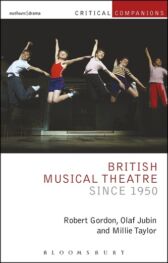 The genre is situated within the historical context of post-war British society in order to explore the range of forms through which significant sociocultural moments are represented.

Introductory chapters analyse the way British musicals have responded to social change, the forms of popular theatre and music from which they have developed and their originality in elaborating new narrative strategies since the seventies

A key feature of the book is its close readings of twelve key works, from Salad Days (1954) and Oliver! (1960) to global smash hits such as Les Misérables (1985) and The Phantom of the Opera (1986) and beyond, including the latest critical and box-office success Matilda (2011)

Also analysed are British favourites (Blood Brothers, 1983), cult shows (The Rocky Horror Show, 1975) and musicals with a pre-existing fan-base, such as Mamma Mia (1999)

PART ONE: Musicals and Social Change

1.1 British Theatre and Society after the Second World War

1.2 Innovation and Nostalgia: Camp in the Post-War British Musical

1.3 Rock and Roll and the Theatre Revolution

1.4 The Play with Music: Political Theatre and Working-Class Culture

1.7 Global and Local: The Family Musical

2.1 Nostalgia in Character and Dramatic Form

PART THREE:: Narrative and Story-Telling in the British Musical since 1970

3.1 Concept Recordings: When What You See is What You Have Heard

3.2 Sung-Through Shows: When the Spoken Word is Shunned

Case Study 11: The Phantom of the Opera

3.5 Jukebox Musicals: When You Know All the Songs

3.6 Stage Adaptation of Films: When the Cinematic Becomes the Theatrical