Bring in the Peacocks - Memoirs of a Hollywood Producer 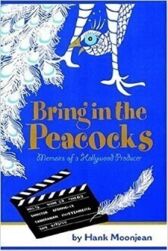 "I was fortunate to be a part of the Golden Years of Hollywood, albeit the tail end of it

With stars who were stars

That’s when I joined MGM

Then I retired, having received an Academy Award nomination for the best picture of 1988.

The book, hopefully, will reflect the 'happenings' that occur during the making of a film – some sad – some fascinating but definitely extremely humorous

This is raw Hollywood as it was"