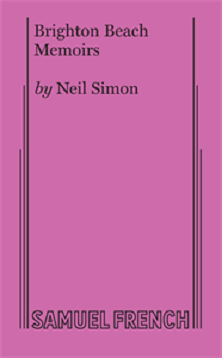 Brighton Beach Memoirs is the first of Neil Simon's autobiographical trilogy, a portrait of the writer as a Brooklyn teenager in 1937 living with his family in crowded, lower middle class circumstances

Eugene - the young Neil Simon - is the narrator and central character

The play captures a few days in the life of a struggling Jewish household that includes Eugene's hard working father, his sharp tongued mother, his older and vastly more experienced brother Stanley, his widowed aunt and her two young daughters

As Eugene's father says, "If you didn't have a problem, you wouldn't live in this house"

Two have heart disease, one has asthma, and two at least temporarily lose jobs needed to keep the straitened family afloat

Family miseries are used to raise such enduring issues as sibling resentments, guilt ridden parent child relationships and the hunger for dignity in a poverty stricken world

"Brings a fresh glow to Broadway .... In many respects his funniest, richest and consequently the most affecting of his plays" ~ N.Y. Daily News

"Simultaneously poignant and funny. The characters are fully dimensional, believable .... An outstanding show ... the best seen on Broadway in too long a time" ~ Variety

FOR SECOND PLAY IN THE TRILOGY - BILOXI BLUES
click here