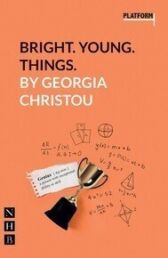 On a reality television show, six remarkable – and remarkably young – geniuses are competing for the coveted Golden Brain trophy and the title ‘Britain’s Brainiest Child’

As the contestants battle it out round after round, the pressure mounts, the spotlight gets harsher, and each is faced with questions they were never expecting

Who will win and who will lose – and what exactly does winning mean anyway?

Georgia Christou’s Bright. Young. Things. is a funny, fast-paced play about identity, truth and the challenge of finding out who you really are

It is part of Platform, an initiative from Tonic Theatre in partnership with Nick Hern Books which promotes greater gender equality in theatre by publishing big-cast plays with predominantly, or all, female casts, written specifically for performance by young actors

'There is fun to be had in portraying these quirky characters and some amusing situations, plus the flexible staging leaves a lot of staging decisions to the company... an interesting challenge for any youth group' ~ British Theatre Guide

'[Offers] strikingly different characters and an effective storyline... a young, brilliant director could do wonders with this' ~ Broadway World

'A clever piece about identity, parental pressure and the media... has much humour and tremendous energy' ~ BritishTheatre.com