Breaking from Realism - A Map/Quest for the Next Generation 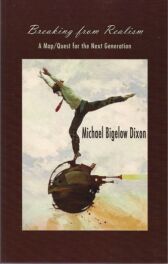 Breaking from Realism introduces 15 concepts, methods, and tools from creative workshops, all of which guide playwrights away from conventions of realism and toward more theatrical and imaginative forms of theatre

Michael Bigelow Dixon has worked as a director and dramaturg on the development and production of hundreds of new plays as Literary Manager at Actors Theatre of Louisville, Literary Director at the Guthrie Theater, and Resident Director at The Playwrights Center