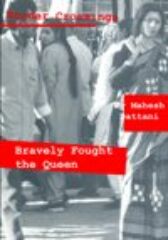 The script is in three acts, titled 'Women', 'Men', and 'Bravely Fought the Queen'

Set in Bangalore of the 1980s and 1990s, the narrative is "centred around an Indian family, in which two brothers, the co-owners of an advertising agency, have married two sisters

The women remain at home much of the time, where they look after the men's ageing mother Baa

Much of the play's tension comes from the interaction between the enclosed, claustrophobic, female world of Act I and the male world of business in Act 2

The fact that both sexes are living lives based on fantasy is cruelly exposed when the characters confront each other in Act 3, and the realities of their lives emerge. The homosexuality of one of the brothers, the crippled daughter of the other marriage, Baa's continued presence - all of these facts are concealed in the uneasy world which the characters inhabit

The play becomes a plea for humanity and for tolerance, but it is equally a cry for the acceptance of Indian values that are shifting, where tradition and contemporary clash, fuse and create a new social landscape

Dattani writes with a pungency that is skilfully disguised, employing language that resorts to clarity and sharpness, one that pushes the limits of the spoken word and the pregnant silences in between