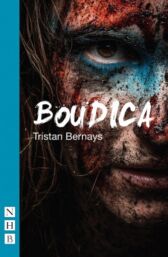 "I'd rather walk in blood than walk a slave"

At the very edge of the known world

On the furthest outreaches of the Roman Empire

A rebellion is brewing

The King of the Iceni has died and his widow, Boudica, has tried to claim her rightful throne

For her insolence in defying Rome, the Queen has been flogged and her daughters raped

And banished from their homeland

But now, Queen Boudica has returned

And this time she has an army

She will have revenge

She will have blood

And she will make Rome quake in fear

"An epic, blood-soaked spectacle ... Bernays' writing is beautifully clear and disciplined. And with gods, battles, warriors and a stage awash with blood, Boudica is a thrilling, challenging and thoroughly disturbing examination of one of Britain's bloodiest and feistiest patriots... A valiant, loyal, principled queen with right on her side. In fact, a woman you would follow into battle. Five-Stars" ~ whatsonstage.com

"Superb... Fast, foul and funny - Boudica is definitely not one for the fainthearted! It is a refreshing piece of new writing that was absolutely made for the Globe, and plays its part in providing meatier roles for women. It is exactly the kind of brave, bold work that needs to be continually championed. Five-Stars" ~ Broadway World

"Meshing the mythic and the modern ... Boudica is a work of size and admirable ambition, and a lot of fun" ~ The Stage

"Magnificently full-blooded ... Packed with sword fights and exuberant filth, this is a show for fans of Game of Thrones rather than for a gentle family outing or politely educational school trip ... The writing is inventive and often vivid ... Boudica questions what it means to be a leader and a woman, and Bernays leaves us in no doubt that he's concerned with 21st-century issues... The heady blend of gore, pungent humour and anti-war messages won't be to everyone's taste, but it's impressively energetic. What's more, and refreshingly, Bernays has written a play in which women get to do the exciting stuff" ~ Evening Standard Tristan Bernays drives the story forward with great skill, and there are constant nods to Shakespeare... Over the centuries, Boudica has been a handy symbol for everyone from Victorian imperialists to the suffragettes. But what are we to make of her today? Bernay's play is far removed from breastplated Last Night of the Proms camp.. warning us of the danger of splenetic isolation. --Guardian Sprightly, muscular.... A bloody, bawdy reimagining of the story of Boudica... Tristan Bernays's zesty new play puts new flesh on most of the facts, but his main focus is firmly on Boudica's experience as a powerful woman in a man's world and the competing demands on her as a mother and a ruler... A very modern take on an ancient story. --Telegraph