Bordello of the Damned - An Interactive Murder Mystery Game 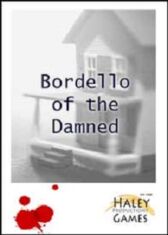 Set in 1880 in the Old West (or modern day if you wish) where Jimmy Hayward rules a downtrodden, almost forgotten town which once thrived and prospered when folks thought gold was in them thar hills

And the Leland is a haven for outlaws (like yourselves) and it houses Madam Iggy's, the best little whorehouse in the South Dakota

Consider it just another night at the Leland, only this time it will more deadly than usual ...

Jimmy Hayward - The self-absorbed type whose main concern is, "what's in it for me?" He controls, uh, we mean he runs Deadwood, The Leland and Miss Iggy's Bordello

Harry Hayward - A simple, kind man who is now very much on the verge of insanity. Back when folks mined for gold here in Deadwood, Harry was the only one to strike it rich by opening The Leland for the miners and their families. The questions you might be asking are what's making Harry insane and why isn't he running the Leland anymore?

Miss Iggy - She was a fearsome religious zealot who ruled her flock with an iron ruler - until she met Jimmy at a revival meeting she was holding in town. Now she has really taken a fall from grace ... she runs the bordello alongside Jimmy as his partner (gotta have a madam after all) - or at least that's what he tells her. Iggy is in love for the first time in her life - with Winking Willie Woodcuff, a customer

Marti - The bordello's newest girl. The boys are all excited to meet her

"Winking Willie" Woodcuff - An outlaw and the bordello's most frequent customer. Of all the girls and even Madame Iggy herself, he's taken a real liking to Freddie

Fredericka "Freddie" Fontaine - Winking Willie's favorite girl, despite what Iggy believes. Working at Iggy's wasn't her first choice in life but her daddy didn't leave her much of a choice when he bet her in a poker game against Jimmy and lost. Now she's part of Jimmy's stable for 2 years or her father will most certainly meet his untimely death

Floyd Hannibal - Jimmy's compadre and a stagecoach driver. Floyd, an extremely jealous and therefore volatile man, keeps what he thinks is a tight reign on his wife, Kit. That reign is looser than he could ever imagine ...

Kit Hannibal - Floyd's wife. She swears she isn't one of Iggy's "girls" but we all know better. Floyd is out of town a lot and a girl gets lonely after all. Besides when he is home, he won't let her have any fun. Kit is in love but it ain't with her husband

SECONDARY SUSPECTS - Optional. Remember, EVERYONE will be actively involved in this mystery because it will be their job to solve the case and because you'll be encouraging them to come in costume and in character

Use any or all of these secondary suspects if you have "extra" cast members you want to use. You will NOT give them a script but you will give them a description of their character and let them run with it

Alice Arthur - The bordello's housekeeper. A real mother hen to the girls. She'd love it if just one customer looked her way so she tries her best to look like one of the girls despite Iggy reminding her of her place (as housekeeper)

Experience McCoy - The town's doctor. You can call on him to declare the victims dead and to expound on the details of their deaths to your guests

Sam Bogart - The piano player (with a broken hand if you don't have a piano or he can't play). Sam was hired by and is completely devoted to Harry and that's why he stays in Deadwood - for his friend Harry

Aurora Borealis - The can-can girl who sings and dances for the Leland patrons. She's even been known to take off her clothes if you get her in a good mood. Last week Experience accused her of stealing his money pouch so Jimmy is threatening to fire her and she and Experience are feuding. (You can give her a sprained ankle if she can't dance!)

Add as many girls to your flophouse as you want. Your guests will be invited to be outlaws and saloon patrons

None of the dialogue is scripted - it's all improvised - the role of the guests is to actively solve the case by asking the suspects questions, following them, eavesdropping on their conversations, and so on - whatever it takes to discover whodunit