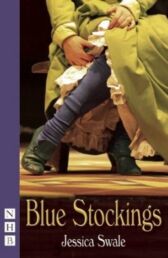 A hugely entertaining, inspiring play about four women fighting to be treated equally in Victorian England

The year's intake of new women face economic difficulty, the distractions of men and radical politics, and the jaw-dropping prejudice that blights every aspect of academic life

In addition, they are refused toilet facilities and are made to eat in biology labs surrounded by cadavers

This moving, funny and eye-opening story of four young women fighting for education and self-determination is played against the larger backdrop of women's suffrage

While skillfully invoking its Victorian setting, the play's themes of gender equality and the power of education are just as important today

FOR A GUIDE FOR STUDYING AND STAGING THE PLAY
click here