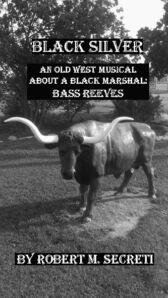 A frolicking musical about a tenacious black lawman, Bass Reeves and his bumbling partner Bat Masterson

Together Bass and Bat compete for the love of a woman, and the notoriety of the Old West

It takes place in Comanche, Oklahoma during the Wild West expansion

Bass Reeves is in Comanche to send a telegraph

During Bass's stop in Comanche, the freight office is robbed by the Bob Dozier gang

The whole southwest and the U.S. Government are in an uproar over the loss of the Katy

The chase through the Old West brings dance hall girls, gamblers, madams, politicians, Indians, and everyone of nefarious character on the trail of the bonds

This love forces Bass and Bat to form an uneasy alliance

While singing and dancing their way into history they negotiate a pardon with Judge Roy Bean. Bass has his wallet stolen by Belle Starr

If that that isn't enough Bass has to deal with the local madam, Fanny Porter to get information

Although the hardships are abundant, a good sense of humor keeps Bass and the rest of the characters singing and dancing their way into your heart