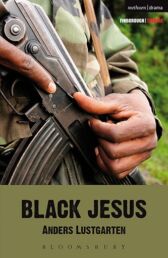 "And do you know why I was called by that name? Because I decided who would be saved and who would be condemned. I took that responsibility for others and now I take it for myself. I am Black Jesus. I do not crawl

Eunice Ncube, working for the new Truth and Justice Commission, begins the interviewing of Gabriel Chibamu, one of the most infamous perpetrators of the horrors of the Mugabe regime

As Gabriel's trial and inevitable prosecution approach, Eunice begins to sift through the past only to find that right and wrong, and guilt and innocence, are far less clear than she first thought . . .

Black Jesus unpicks the political complexities of Zimbabwe through the devastating personal journeys of two very different people - both scarred by one of Africa's most notorious dictatorships.

"The play has bags of vigour and offers a bracing attack on financial capitalism . . . what Lustgarten has to say is vitally important" ~ Guardian