Bitter With a Twist 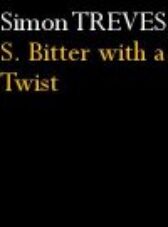 But is it the same joke? And why does the possibility of a blind date send them into a flat spin?