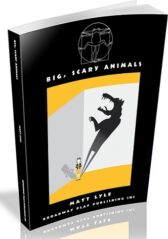 An hilarious collision of race, sex, guns, and sports

What begins as polite dinner conversation with their gay, multi-ethnic neighbors soon careers out of control

Big, Scary Animals examines shifting generational beliefs and just how hard it is to raise a child regardless of who you are and where you live

"Big, Scary Animals sets its sights on the idea that we don't know how to talk about our differences, tackling it with intelligence and humor. Lyle makes his point that words do matter and we should pay more attention to them; but he also effectively satirizes how overly sensitive we can be it provides something sorely needed: Laughter. Lots of it. As he's proven time and time again, Lyle has impeccable timing with a punchline or comic situation" ~ Mark Lowry, TheatreJones

"Lyle toys with your expectations and loyalties and forces the audience to see The Other in a sympathetic (or critical) light, and does so through one of the densest string of laugh-out-loud comedies you'll ever see this smart comedy created a sense of community that is, at its heart, the goal of all theater" ~ Arnold Wayne Jones, Dallas Voice

"The show has a handful of serious moments, but the most thoughtful among these is the concept that no matter how different people think they are, from food to decorating to political and religious opinions, there is common ground and it may be found in the place where we laugh together" ~ Nancy Churnin, Dallas Morning News