Between Us Girls - a novel 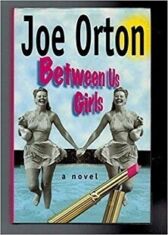 'Laddered my stockings, broke two of my nails, and had Dubonnet spilled over my Madge Chard hat. Life is simply sickening sometimes!'

Published for the first time over 30 years after his death, Between Us Girls is Joe Orton's first solo effort as a writer - a brilliantly sustained comic novel, gently camp, hugely tongue-in-cheek and full of entertaining surprises

The diary of a would-be actress, Susan Hope, Between Us Girls begins in post-war Soho where her first professional engagement is in the chorus of the Rainier Revuebar

It ends in Los Angeles where Susan eventually becomes a famous film star ...

Written in 1957, seven years before Orton's breakthrough with the play Entertaining Mr Sloane, this novel marks the effective end of Orton's collaboration with his lover and eventual assassin, Kenneth Halliwell, and the beginning of the discovery of his own voice

An extraordinary blend of the camp comedy of a 'Carry On' film with the pent-up eroticism of 'True Confessions', Between Us Girls is the earliest demonstration of that now much-lauded genre - the Ortonesque