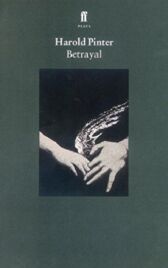 "Betrayal is a new departure and a bold one ... Pinter has found a way of making memory active and dramatic, giving an audience the experience of the mind's accelerating momentum as it pieces together the past with a combination of curiosity and regret

He shows man betrayed not only by man, but by time - a recurring theme which has found its proper scenic correlative ... Pinter captures the psyche's sly manoeuvres for self-respect with a sardonic forgiveness ...a master craftsman honouring his talent by setting it new, difficult tasks" ~ New Society

"There is hardly a line into which desire, pain, alarm, sorrow, rage or some kind of blend of feelings has not been compressed, like volatile gas in a cylinder less stable than it looks...Pinter's narrative method takes "what's next?" out of the spectator's and replaces it with the rather deeper "how?" and "why?"

Why did love pass?

How did these people cope with the lies, the evasions, the sudden dangers, panic and the contradictory feelings behind their own deftly engineered masks?

The play's subject is not sex, not even adultery, but the politics of betrayal and the damage it inflicts on all involved" ~ The Times