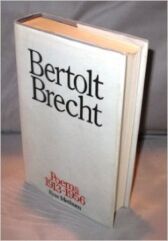 " ... nearly 500 poems are included here, ranging from schoolboyish effusions to the extraordinary taut and disciplined despair of the last verses. The longer the book goes on, the better it gets" ~ Robert Nye, The Times

"A mind-changing volume, after which, for all but the most parochial critics, the pecking order in the modern pantheon will never be the same" ~ Kenneth Tynan, The Observer

"Now that the ballads, love lyrics, satires, mock pastorals, homilies, and political verse have been assembled, it is clear that Brecht was that very rare phenomenon: a great poet for whom poetry is an almost everyday visitation and drawing of breath ... there is no doubt that the two great German poets of the first half of this century were Rilke and Brecht" ~ George Steiner, The New Yorker