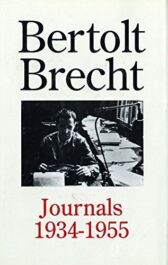 Brecht's Journals 1934-1955 cover the years of exile in Denmark, Sweden, Finland and America, and his return via Switzerland to East Berlin

And the accounts of his own writing practice provide insight into the creation of his dramatic works of the period, the development of his political thinking and his theories about Epic theatre

"A marvellous, motley collage of political ideas, domestic detail, artistic debate, poems, photographs and cuttings from newspapers and magazines, assembled, undoubtedly for posterity by one of the great writers of the century"~ New Statesman and Society

"Many of the entries are as provocative as anything he wrote, containing ruthlessly candid assessments of his own works and those of others and full of unexpected insights and throw-away judgements inviting both consideration and disagreement ... an indispensible source work for understanding the development of the playwright-poet's views on art, politics, and the theater" ~ Kurt Weill Newsletter, Spring 1995