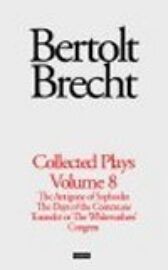 Volume Eight of Brecht's collected plays contains his last completed plays, from the eight years between his return from America to Europe after the war, and his death in 1956 ...

Antigone & Days of the Commune & Turandot or the Whitewasher's Congress

These three plays are the product of Brecht's attempts to establish a new post-Fascist literature and theatre in the German Democratic Republic, and the establishment of the legendary Berliner Ensemble