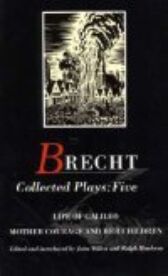 The fifth volume in the Brecht Collected Plays series brings together two of Brecht's best-known and most frequently performed and studied plays: Life of Galileo and Mother Courage and Her Children

Galileo, which examines the conflict between free inquiry and official ideology, contains one of Brecht's most human and complex central characters. Mother Courage is also one of Brecht's great creations: a "chronicle play of the Thirty Years War", in which a mother clings to her livelihood, while one by one she loses her children to war

The translations are ideal for both study and performance. The volume is accompanied by a full introduction and notes by the series editor John Willett and includes Brecht's own notes and relevant texts as well as all the important textual variants