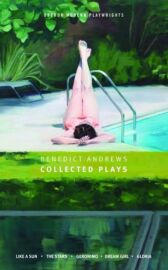 The plays are Like A Sun, Every Breath, The Stars, Dream Girl, and Geronimo and Gloria

The Collection also includes an Introduction by Marius von Mayenburg.

"Benedict Andrews is one of the original imaginations of Australian theatre. For ten years now he has been applying his complex startling vision to some of our dramatic literature, as well as illumination new writing, both nationally and internationally. His work is marked by the intense and fragile beauty of its imagery and the sense of deep metaphor lying beneath the narrative surface. In an art form that needs to be both popular and pragmatic, Benedict manages to remain that rare thing - a poet" ~ Neil Armfield

"A bracingly original vision: [Andrews] turns the play inside out, bashes it around, and drops in anachronisms, yet his approach yields revelatory results ... moving and absorbing" ~ Evening Standard on his production of Three Sisters

'Everyone wants to work with him He shakes up a company with his energy. His rehearsal rooms are muscular brutal, even but he loves being surprised he has an incredible visual sense and he can wrestle any text to the ground" ~ Cate Blanchett on Benedict Andrews Sydney Morning Herald