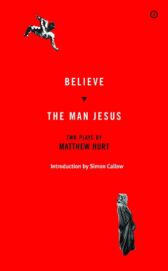 This one-woman play is a contemporary re-imagining of the stories of four female characters from the Old Testament - the prostitute Rahab, the army wife Bathsheba, the seductress Judith and the martyr Hannah

Re-cast in a psychologically truthful light, their tales are shocking even by today's sensationalist standards

From seduction, torture and decapitation to infanticide and rape, these are women surviving in violent times

Believe explores what 'God' and faith means to these women

The Man Jesus is an extraordinary one-man play that looks at the key moments in the life of Jesus through the eyes of the tyrants, traitors, madmen, and the men and women around him

This startling and moving account of New Testament stories includes the beheading of John the Baptist, the Sermon on the Mount and the final journey to Jerusalem

Hurt's powerful portrayal of the tyrants, traitors and madmen in Jesus' life asks people of all faiths and none - what sort of man was able to inspire the history of the world?