Behind the Beautiful Forevers 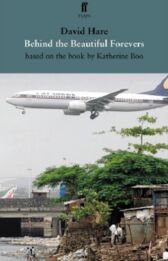 India is beginning to prosper

But beyond the luxury hotels surrounding Mumbai airport is an obstacle, a makeshift slum

Manju, a schoolteacher, hopes to be the settlement's first woman to gain a degree

Asha, the go-to woman, exploits every scam to become a first-class person

And Fatima One Leg, is about to make an accusation that will destroy herself and shatter the neighbourhood

Behind the Beautiful Forevers premiered at the National Theatre, London, in November 2014

"Magnificent ... has a humane, dignified sweep that captivates" ~ Independent