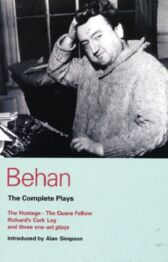 This volume contains everything Brendan Behan wrote in dramatic form in English including the three famous full-length plays ...

The Quare Fellow, set in an Irish prison - "In Brendan Behan's tremendous new play language is out on a spree, ribald, dauntless and spoiling for a fight ... with superb dramatic tact, the tragedy is concealed beneath layer after layer of rough comedy" ~ Observer

The Hostage, set in a Dublin lodging-house of doubtful repute where a young English soldier is being kept prisoner - "shouts, sings, thunders and stamps with life ... a masterpiece" ~ The Times

Richard's Cork Leg, set in a graveyard - "a joyous celebration of life" ~ The Guardian

The volume also contains three one-act plays, originally written for radio and all intensely autobiographical - Moving Out, A Garden Party & The Big House