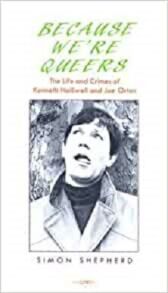 Published by The GMP Publishers Ltd

Like many past figures of gay culture, Joe Orton's fate was to be used by the straight world for its own purposes

He has come to symbolise the 'Swinging London' of the mid-Sixties, with his subversive and distinctly gay message conveniently blunted

Kenneth Halliwell, who with his lover helped to create the Ortonesque, was cast as villain by the theatrical establishment long before the tragedy that ended both their lives

In this pioneering study, Simon Shepherd reclaims Orton and Halliwell for the gay movement, setting both their achievements and their limitations against the repressive backdrop of homophobia and hypocrisy that is still so characteristic of England today