Battle of Britain - A Story of the Few - SUPER PERFORMANCE PACK 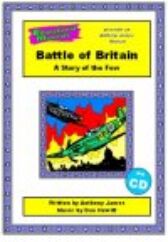 Their Grandad then tells them a story of two young men, Dizzy and Fred, who decide to join the R.A.F. and two young girls who join the W.A.A.F

The four young people learn of the importance of Radar, the fear of air raids and the fight against the Luftwaffe before they are caught up in the momentous Battle of Britain itself

Battle of Britain is a fictional story based on the World War Two aerial conflict prior to the cancelled German invasion of Great Britain during the summer of 1940. The musical includes insights into the workings of the Royal Airforce, its pilots and ground crews, and probably one of the most famous fighter planes of all time, The Spitfire

Created specifically for children aged 7 - 11, this lively and educational look at a battle that radically changed the course of World War Two, is accompanied by an epic score of memorable and catchy songs you will find hard to forget

The Script- including stage directions with Historical Fact Sheets

THE OTHER SONGS ARE

Far Away - The Civilians
We Will Help You- Kathy & Doris
R.A.F. - R.A.F. & W.A.A.F. Personnel
Eyes That See - David & Doris
Spitfire - The two Trainees
The Air Raid - Civilians & A.R.P. Wardens
We Must Not Lose - Doris & Fred
The Sun Is Always Shining - Dizzy
Finest Hour - The Civilians
Battle of Britain (Reprise) - All