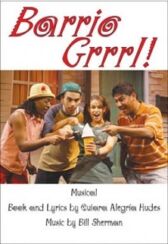 On the one hand, as her alter-ego, Barrio Grrrl, with her invisible sidekick, Amazing Voice, she's pretty busy preserving justice in the barrio and protecting her neighborhood

On the other hand, in the world where Ana lives with her abuelo and misses her mom who is far, far away in Iraq, reality is sneaking up on her

"Let’s hope there are 401(k) plans for imaginary friends. After all, their careers don't last forever, as Quiara Alegría Hudes reminds us in her gentle, witty children's musical [that] eschews conventional narrative thrills and chills in favor of exploring children's creative and emotional lives" ~ The Washington Post

"The story includes some delightful fantasy sequences along with flashbacks that tell Ana's story in a lively manner … Children simply get carried away by the delightful music. Be warned that the opening title song is a particularly insidious 'earworm' that will leave 'Barrio, barrio, barrio, barrio GRRRL!' ringing in your brain for hours afterwards" ~ DCTheatreScene.com