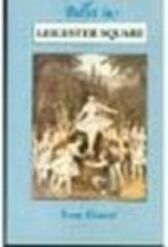 The intervening period has often been cursorily passed over by historians, and here, for the first time, Ivor Guest reveals how ballet flourished in two of London's most famous music halls, the Alhambra and the Empire