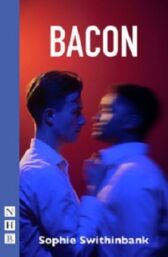 It's Year 10's first day back at school

Mark is new and too scared to make friends

Darren is out of control and too scary to make friends

Worlds apart, but more similar than they realise, the pair form a complex and manipulative relationship

And before they know it, they're embarking on a dangerous experiment that will alter the course of their lives

Sophie Swithinbank's play Bacon is an unflinching and unexpectedly humorous look at masculinity, sexuality and power, through the dizzying lens of youth

First developed on the Soho Theatre Writers' Lab, it won the Tony Craze Award in 2018, and was first produced at the Finborough Theatre, London, in 2022, directed by Matthew Iliffe

A bleak but utterly compelling drama about the end of youth... a car-crash of a story, unfolding in a playground, that's both beautiful and devastating to watch... Swithinbank's writing is potent, with a sucker punch of an ending ~ The Stage