Ayckbourn in an hour 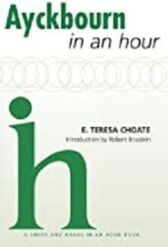 During rehearsal, Ayckbourn complained about the role he was playing that day

Stephen Joseph, his mentor, threw down his script and said that if Alan wanted better roles, he should write them himself

Ayckbourn did just that

He penned The Square Cat, which had a successful run in Scarborough, England during the summer of 1959

Setting the playwright in context to his personal life, social, historical and political events, other writers of influence, and more, you will quickly gain a deep understanding of Alan Ayckbourn and the plays he wrote

Know the playwright, love the play!