Auditioning for Film and Television - Secrets from a Casting Director 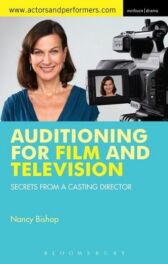 "If you're working with Nancy Bishop you know you're in good, accomplished hands, whether you're a director or an actor" ~ Neil Burger, Director of The Illusionist

It's written from the perspective of a Casting Director and offers practical advice on audition technique, scene analysis, online casting and social media

It's also very much a practical workbook

From the Casting Director's POV, it teaches actors how to audition in front of the camera as well as how to use today's internet technologies to advance their career

It also includes commentary, analysis and questions using scenes from many celebrated films

In short, if you're hoping to make a living as an actor, you need this book

Nancy Bishop C.S.A is an Emmy award-nominated casting director who has cast supporting talent on over sixty projects

She has worked with such major directors as Roman Polanski, and Joel Schumacher, and legendary producers such as Steven Spielberg, and Jackie Chan