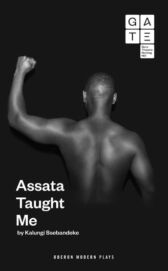 Fanuco's taking English lessons from the only American he knows

Problem is, she's the FBI's most wanted woman

And he's a Cuban teenager desperate to live the American Dream

When will he realize his mentor is a former Black Panther

And has a million dollars on her head?

'It's almost a twist on Willy Russell's Educating Rita not just language lessons laced with class warfare - but a student aspiring to everything his tutor despises. Fanuco's infatuation with all things American, from its hip-hop stars to its suave black president, runs counter to Assata's unswerving anti-capitalist, anti-imperialist stance ... Ssebandeke captures, brilliantly, the ambiguity of Assata herself... She is, Ssebandeke makes clear, stuck in the past, listening to old vinyl records and clinging to old enmities. Is that down to her - a woman who puts her African ancestry ahead of her American identity or down to the country that cast her adrift? ... nothing if not pulse-quickening" ~ What's On Stage ★★★★

" ... often funny, often sad ... without giving away too much, the way the scene cashes in on the sexual dynamic between the two characters is pretty masterful, and I only acknowledged the breath I was holding in when it was all over" ~ Exeunt

"The audience enter the theatre through Assata's front door ... Once the play begins we are locked in. Throughout, the door is watched like a hawk, often with Assata's handgun trained on it, proof that the freedom her student seeks in America is not as simple as he imagines" ~ The Stage