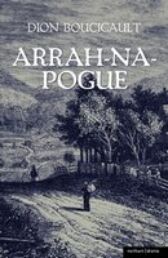 Written in 1864 and set during the Irish rebellion of 1798, Arrah na Pogue is is an entertaining tale of romance and misadventure with rascally rebels, despicable villains and love struck youths ...

As night falls on the Wicklow mountains, the popular but incorrigible rebel Beamish MacCaul is lying in wait

That done, he's off to marry Fanny Power

Meanwhile, down in the valley, love is in the air for Shaun the Post and our heroine Arrah Meelish too

But Arrah has a secret - and Michael Feeny's found out

As Shaun and Arrah celebrate their wedding, revenge comes a-calling But Love conquers all - including the hangman's noose! The play is full of Boucicault's trademark comic roguery, farce and melodrama, which has influenced Irish playwrights including Synge, O'Casey, Shaw and McDonagh

Dion Boucicault, "the most conspicuous English dramatist of the 19th century" (New York Times), was a witty, selfish and deceitful charmer, a bigamist, a profligate spendthrift and the author of dozens of successful plays, only a handful of which endure