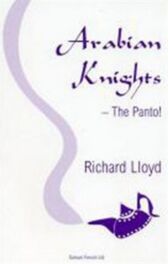 A zany panto romp with Richard the Lionheart and his Crusaders

Richard meets Saladin plus all the best Arabian Nights gags in one corking script!

The Arabian Knights is an eastern concoction into which every conceivable Arabian Nights cliché has been stirred, seasoned with a tiny twist of alternative history, and cunningly bound together in a traditional pantomime recipe, featuring lots of familiar ingredients

As part of his fiendish plot to defeat Richard the Lionheart, the evil Saladin sends his henchmen on a magic carpet to Merrie England, to abduct Richard's Sweetheart, Thomasina

Who quickly proves that the wicked Caliph has bitten off rather more than he can chew!

Hasan, who is not quite what he seems, is no friend to Saladin, and together with Thomasina, sets out to rescue Auntie!

With the help of an assortment of genies, assassins, eunuchs, Turkish wrestlers, dancing girls and pantomime camels, Dame Dollop escapes from the harem to outwit Saladin, and allow Richard to recapture the holy city of Jerusalem

All in time for Christmas Day!

An hilarious, original, and thoroughly entertaining pantomime, guaranteed to transport all involved to the land of the Arabian Nights