Anything Goes - A History of American Musical Theatre 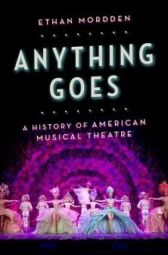 Anything Goes stages a grand revue of the musical from the 1920s through the 1970s, narrated in Mordden's famously witty, scholarly and conversational style

He places us in a bare rehearsal room as the cast of Oklahoma! changes history by psychoanalysing the plot in the greatest of the musical's many Dream Ballets

Dance was once considered as crucial as song - he follows it from the nineteenth century's zany hoofing to tap 'combinations' of the 1920s, from the injection of ballet and modern dance in the 1930s and 40s to the innovations of Bob Fosse

From'ballad opera' to burlesque, from Fiddler on the Roof to Rent, the history and lore of the musical unfolds here in a performance worthy of a standing ovation