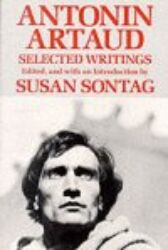 A revolutionary figure in the literary avant-garde of his time, Antonin Artaud (1896-1948) is now seen to be central to the development of post-modernism