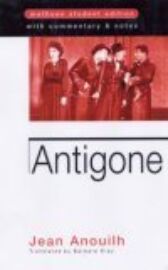 Antigone was originally produced in Paris in 1942, when France was occupied and part of Hitler's Europe. The play depicts an authoritarian regime and the play's characters mirrored the predicament of the French people of the time

Based on Sophocles' ancient Greek tragedy, Antigone, which was first performed in Athens in the 5th century BC, its theme was nevertheless topical. For in Antigone's faithfulness to her dead brother and his proper burial and her reiterated "No!" to the dictator Creon, the French audience saw its own resistance to the German occupation

The Germans allowed the play to be performed presumably because they found Creon's arguments for dictatorship so convincing. The play is regularly performed and studied around the world

This volume contains expert notes on the author's life and work, historical and political background to the play and a glossary of difficult words and phrases