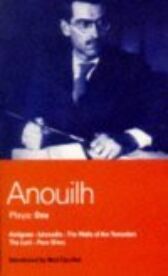 Jean Anouilh (1910-87) along with Jean-Paul Sartre and Albert Camus, was at the forefront of the post-war generation of playwrights in Paris

In England his plays were championed by Peter Brook. Antigone is a response to the German occupation of France and established his popularity in 1944 (the Germans ironically, thought that it was a pro-Nazi in its portrayal of King Creon and thus allowed its production)

All three plays show his fondness for reworking myth, history and legend

Meanwhile Leocadia, about an opera singer who dies after a three day love affair with a prince and The Waltz of the Toreadors, about a general whose mistress attempts to prove his wife's infidelity, represent another talent - for ironic, modern comedy

This revised edition of some of Anouilh's most enduring work dramatically reveals not only his love of re-working myth, history & legend, but in Leocadia and The Waltz of the Torreadors we see his pleasure when playing with ironic, modern comedy