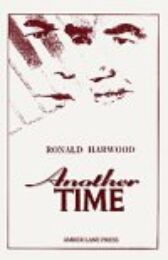 It is the early 1950s in Sea point, Cape Town. Leonard Lands, aged seventeen and the only child of immigrant parents, is already an outstandingly gifted pianist. It is clear that he must go to Europe to study if he is to achieve the success that his talent demands

Thirty-five years later, in London, Leonard reaches another turning point in his life. What price has his single-minded devotion to his music exacted on his relationships with his family?

"...it shines with honest understanding, with true compassion..." ~ Jack Tinker, The Daily Mail

"...when he writes from the pressure of personal experience (as here and in The Dresser) his work has a spontaneous life" ~ Michael Billington, The Guardian

"Another Time is a solid, intelligent piece of work ... Harwood has a sure sense of both the comedy and the pathos of his subject" ~ John Gross, Sunday Telegraph

"About the only thing that's weak about Ronald Harwood's new comedy is the title..." ~ Hugo Williams, Sunday Corresponde