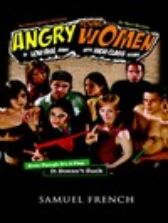 It's all about young women and the various issues they confront today - part sit-com, part stand-up comedy and part sketch-comedy

This collection of vignettes parades a series of foxy, witty and anxious women who bear the expectations of the world like an itchy muffler

These girls are coffee-driven, sensitive, wired, misunderstood and fuming with awkward issues

They are frustrated with the way of the world, the perceptions men have of them and their own reactions to it

How, for example, do you resolve contradictions like dressing as a hooker and still being a feminist?

So they go head to head with such issues as Electra complexes, bikini waxes, low rider jeans, their oversexed mothers, thongs, brazen teenagers, men's sexual fantasies, side effects of birth control drugs, mean teenagers on the subway, sympathy sex and the artistic integrity of penises and vaginas as in independent films