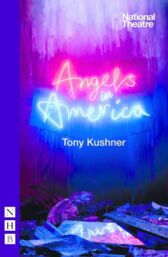 It presents America in the mid-1980s in the midst of the AIDS crisis and a conservative Reagan administration, when New Yorkers grappled with life and death, love and sex, heaven and hell

The 352 page Volume contains both Part One: Millennium Approaches and Part Two: Perestroika

Plus 45 pages of bonus material including a new introduction by the playwright, a full production history, deleted scenes, and notes on staging

"The finest drama of our time, speaking to us of an entire era of life and death as no other play within memory. In its sweep and imagination, it defines the collapse of a moral universe during the Reagan years in an unforgettable way, transcending its specific time in the richness of its portrait of an America Lost, perhaps to be regained... It's a pretty funny play, too. How we still need it! It ranks as nothing less than one of the greatest plays of the twentieth century" ~ New York Observer

"A victory for theater, for the transforming power of the imagination to turn devastation into beauty" ~ John Lahr, New Yorker

"Establishes Kushner as a poet and moral visionary in love with the theater yet awake in the world" ~ Don Shewey, Village Voice