An Evening With Sherlock Holmes 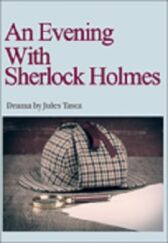 Large Mixed Cast
An Evening With Sherlock Holmes presents a unique evening of mystery in three one-acts, each running about 30 minutes

The Adventure of the Noble Bachelor ~ M5,F2

The first mystery of the trilogy tells the tale of a British aristocrat, Sir Robert, who marries an American millionaire because his family fortune has run out

However, on the wedding day, his young American wife, Hatty Doran, disappears

And a happy ending ensues

The second play pits Holmes and Watson against nefarious blackmailer Charles Milverton, who is blackmailing one of Holmes' clients - a woman who wrote several damning letters to a former lover that could, if revealed, destroy her impending marriage to the Earl of Dovercourt

In his effort to save his client, Holmes plans a radical solution - burgling Milverton's house and retrieving the damning correspondence

But on the night of the burglary, their attempt is interrupted by an unforeseen incident ...

So do they turn the woman who murdered Milverton into the police or not?

The Disappearance of Adam ~ M2,F2

Here Holmes must solve one of the great existential mysteries - a riddle that has puzzled the most brilliant minds in history!

How does a person cope with their own demise?

Can Holmes solve this mind-boggling case?

The answer is given in a not-to-be-missed climax!