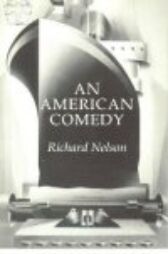 "...if you can believe that a play can be part ROOM SERVICE, part DAS CAPITAL and part HIS GIRL FRIDAY, you've got the premise of the wildly funny AN AMERICAN COMEDY

The play is such an accurate pastiche of the time, that some audiences have taken it for a genuine comedy written in the 30s

There's so many doors slammed, fires put out, trunks shut, typewriters ruined, disrobings, and darts thrown that at times you think you've wandered into a lost Marx Brothers comedy ~ Diane Wright, The Herald

Originally produced by the Mark Taper Forum, and subsequently by A Contemporary Theater in Seattle