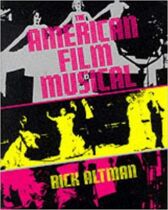 Illustrated with over 200 frame enlargements and production stills

"An important addition to both literature and film collections .... a landmark study" ~ Library Journal

"The American Film Musical is a truly admirable book which is well worth making a song and dance about. It will immediately assume biblical authority for all who are seriously interested in the dream-factory's most lavish fantasies, and it may even come to stand as a landmark in our understanding of Hollywood as a whole .... Altman's book is thorough, well informed and warmly good-humored. It has brought the study of musical films out of the dark ages" ~ Times Literary Supplement