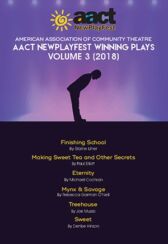 Elaine Liner and others

Over a two-year period, playwrights submit their play to AACT for consideration, and winning scripts receive a world-premiere

Making Sweet Tea and Other Secrets ~ Paul Elliott - M2,F3 + 1 Either

Dottie and Ruth have always kept their lives in order, living each day in rural isolation and contentment. All of that changes when the sheriff drops off a battered teenage girl and asks them to keep her safe. Neither is prepared for the role of savior, and they are even less inclined when they find out the girl is really a boy and the person who almost killed her is her father. This play refers to all the hidden bigotry, prejudice and even brutality a town will turn a blind eye to, until forced to bring those secrets to light and fight back.

Abe, an angel of death, decides to move a client appointment in favor of getting an ice cream sandwich. The only problem is that his "appointments" are to greet the newly deceased and take them to the next stop. Things quickly spiral out of control when Abe's repeated attempts to "bump off" his delayed appointment fails, and the real threat of a new "unauthorized life" will occur unless Abe gets everything back on track. A surprise visit from the boss helps Abe rediscover the real meaning of life and death

Adam is a comic book writer coasting on his past successes. Ket is young and ambitious. As the duo sets to work on the 100th issue of Mynx and Savage, the fantasy bleeds into reality as the superheroes and their mild-mannered alter egos invade the artists' space. Adam finally starts to trust Ket and shares the story he's been hiding. In the end, as the worlds of the children, the superheroes and the artists collide, Ket helps Adam realize that he has no future until he makes amends with his past

Johnny could be a typical 17-year-old boy, hanging out in his treehouse and dreaming of talking to the beautiful Alana, were it not for his insistence that he has the mind of a 53-year-old. As Johnny persists in his claim that he's an old man in a teenager's body and conversations in the treehouse become increasingly peppered by the words of the Bard, Johnny grapples simultaneously with adolescence, love and the mind's ability to heal from great loss

Sweet centers around three generations of the Carter family, headed by former boxing champ "Sweet" Clemmet Carter. Now in failing health, Clemmet lives for the memories of his glory days and building puzzles with his grandson. When an enthusiastic sports writer wants to write a book about Clemmet's life, Clemmet finds the project an excuse to relive all his old fights while his wife becomes increasingly hostile. As Trevor pushes back against Addie's wrath, he discovers some family secrets are best left buried

This comedy about life's second act finds older gents Al and Wizzer meeting on a park bench every morning to read and mock newspaper obits. Their daily rituals-shooting the bull about sports, women loved and lost and the many annoyances of aging-are suddenly shaken up by the appearance of a friendly young woman and her flirty mom, and Wizzer pep-talks lonely widower Al to convince him to break out of his self-imposed "quantum of solace" and maybe find love again